Alumna delivers health care aboard the Africa Mercy, not once but 10 times

Although the voyage of relief is now in dry dock due to COVID-19, this nurse will someday return to the floating hospital ship

Her life flipped when she spotted the water bottle. Back in 2011, while toiling away as an operating room nurse at the Alberta Children’s Hospital, Tara McHardy, BN’05, noticed the words Mercy Ships on an anesthetist’s water bottle — and began asking questions.

Turns out the anesthetist was about to leave for a two-week volunteer shift aboard this floating hospital in Africa and encouraged McHardy to follow — but that was before McHardy discovered that volunteers had to pay for their own flights, vaccinations, and crew fees (about US$700 a month).

“Plus, I realized I’d be taking my holiday time,” recalls the 37-year-old, who returned last month from her 10th mission, this time from Senegal, where Prime Minister Justin Trudeau visited on Feb. 12. Since her first service shift to Sierra Leone back in 2011, most of McHardy’s missions have averaged a few weeks, except for the time she ditched her job in Calgary and went to Togo for six months. Other ports of call have included Madagascar, Cameroon, the Republic of Congo, Guinea and Cameroon.

Medical team at work in the operating room on board the Africa Mercy.

Founded in 1978 by a couple from Texas, this international humanitarian organization has used ships to deliver free health care services to some 70 countries in Africa. Every year, more than 1,200 volunteers, from up to 40 countries, volunteer onboard the Africa Mercy, which has treated more than 2.7 million people since its inception. Along with philanthropic gifts, the volunteer fees, that first made McHardy flinch, are what keeps this boat afloat — literally.

That was true until early March, when the fear of COVID-19 prompted an abrupt stop to the program in Dakar that was scheduled to operate until June. Typically, the ship undergoes routine maintenance every year before moving on to another African port; due to COVID-19, that part of their operational routine was accelerated. This unprecedented disruption does mean that hundreds of patients who were waiting for surgeries may now not be given that chance. Mercy Ships is also evaluating how the organization could be used to assist the global pandemic, but no firm decisions have been made.

But back in “regular times,” McHardy point outs that Africa Mercy is home to 400 volunteers and 55 to 60 patients at any one time. Life onboard, she says, is like a “small village . .

Home to 400 volunteers, and 55 to 60 patients at any one time, McHardy describes life onboard as a ”small village where you’ll find lots of people who have lived on the ship for two, four, even six years.

“In fact, the chief surgeon, Dr. Gary Parker, has been there for 30 years — he raised his kids there. Which is why we have a school on the ship, a small gym, a lounge for lessons [like French or ukulele], even a Starbucks [an Americano is just 50 cents]. And the Mercy stays in the same port for 10 months, long enough to feel part of a bigger community.”

Tara McHardy has returned from her 10th volunteer shift aboard the Africa Mercy hospital ship.

It may sound very civilized but that’s not what McHardy thought when she and another volunteer first arrived at Sierre Leone’s airport in the middle of the night and were whisked away in a small motorboat which promptly conked out (plastic bags were snagged in its motor).

“There we were bobbing in the ocean with a dead motor and no lights,” she remembers, laughing, now. “When we finally got to the ship we had to climb up a cement wall onto a hot and smelly deck where I found my cabin, that I wound up sharing with five other people, and I thought ‘I can’t believe I am doing this.’

Of the 100,000 life-changing or life-saving surgical procedures that have been performed aboard these Mercy ships, the most common are cleft-lip and -palate repair, cataract removal, orthopaedic procedures (clubfoot and bowed legs), facial reconstruction and obstetric fistula repair. Onboard are five operating theatres, a four-bed recovery area, intensive care for up to five individuals and 70 ward beds as well as a CT scanner, X-ray and lab services.

On the third deck in the belly of the ship, where fires are a concern, is the OR where, on most days, you’d find McHardy and a team performing surgeries, just as she would back in Calgary at the children’s hospital. Her altered world would happen at the end of a shift when she’d look out across the coastline.

“That’s when the poverty would strike me,” she says. “In North America, our coastlines are typically taken up with big, beautiful mansions and wealth, but in Africa, it’s the poorest of the poor who live in shacks and fishing boats along the water. And then there’s the smell that comes off the water where there are dead things floating by as well as plastic bags and . . . just junk.”

Also shocking to McHardy, most starkly on that first trip, was the amount of need and “the benign things that are so easily fixed here, like a tumour tissue,” she explains. “In Canada, most of us would get them removed when they were the size of a marble but in Africa we see them the size of a watermelon and it’s debilitating.” 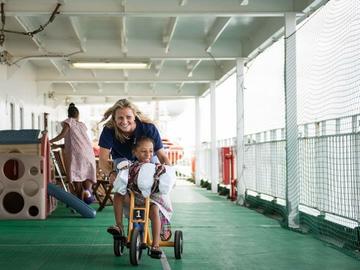 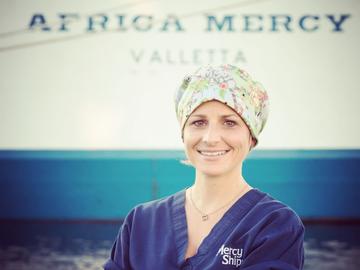 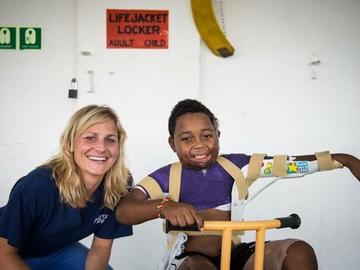 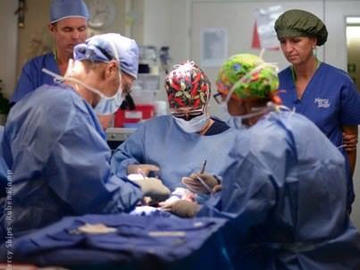 Flipping through her photo album of beloved patients you’ll see Havi, the little girl whose chin and bottom lip were basically stuck to her chest, from a web of burn scars. Further in the book are snapshots of little kids in full leg casts (for numerous deformities) and pages and pages of photos of adults with massive facial tumours that may have required the removal of an entire jaw, to be replaced by a metal version. Other procedures require a muscle flap rotation with multiple skin grafts, “things you never ever see here,” says McHardy, in obvious awe of the patients’ courage and strength to endure these painful surgeries.

“Imagine feeling like a freak where people would run away from you, or mock you, or what complete ostracization would do to you,” she explains, while describing each case.

It’s the joy and gratitude that McHardy sees, post-op, that keeps her coming back.  Yes, her freedoms are somewhat curtailed while she’s on the ship — early morning runs, for example, are flanked by Gurkha soldiers who guard the ship 24/7 — but the flip side is the surgeries can be truly transformative.

“It’s certainly not about the paycheque .  . . we pay them, remember?” she says, searching for words. “Maybe it is about making the world a little better, even if it’s just for one person. You get that onboard the Mercy. 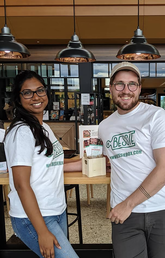 How three small food enterprises in Calgary cope with a pandemic 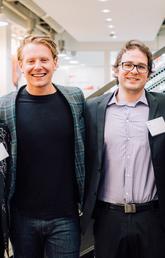 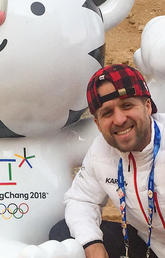 Speedskater-turned-coach and massage therapist riffs on life, sports, and life after sports 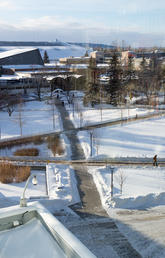 Get help, or volunteer to help others, during the COVID-19 pandemic