Every year in Canada, 58 per cent of the food produced is thrown away, costing Canadian consumers almost $1,700 per household when it goes bad.

Recognizing this issue, a group of undergraduate students from the University of Calgary decided to team up to tackle Canada’s food waste problem.

Their solution: food packaging that preserves and protects fresh fruits and vegetables for longer than the standard plastic packaging. The kicker is it can be grown in a petri dish.

The Cellucoat box, the award-winning project of the iGEM team, allows fruits and vegetables to last longer and prevents them from bruising during transport.

“I was looking at addressing food waste and coming up with a sustainable food packaging material,” says Danielle Korsrud, a fourth-year biomedical sciences student on the team who came up with the idea for Cellucoat.

Korsrud and the team developed a packaging using bacterial cellulose, a completely edible material used in things like sausage casing, as the base material.

The team wanted to focus on helping local communities with food waste, including rural and Indigenous communities whose food quality is disproportionately impacted by longer shipping times.

The team encountered a few roadblocks along the way, as they originally planned to produce a spray that would be applied directly to the food. However, they were told by food industry contacts that there is a negative perception from consumers to put something made from bacteria (even if it is food-safe) on their food.

“We had to shift away from an edible spray to just doing a packaging that would hold fruits and vegetables,” says Korsrud. “It basically serves as a plastic replacement.”

Ultimately, after consulting with those industry contacts, the team settled on making a box-shaped packaging.

“Box-shaped packaging is more applicable to a wider range of fruits and vegetables, and, for truck transportation, box shapes are more energy efficient in a cooling space,” says Catherine Ko, a third-year biomedical engineering student on the iGEM team.

The bacterial cellulose-based box is produced from a bacteria, K.xylinus, and also contains anti-microbial proteins and bioplastic proteins which will functionalize the box to preserve fruit longer and make the box itself stronger.

“Our samples are grown on a petri dish and then moved to be grown in a large glass container before being air dried onto a 3D-printed mould for a couple of days,” says Ko.

The box is also completely food safe and compostable.

“We went to the Calgary compost facility and gave them some of our samples,” says Korsrud. “They put them through a composting cycle and found that the samples were much smaller and had broken down.”

The 2022 University of Calgary iGEM team, led by Mayi Arcellana-Panlilio.

The wet lab, which includes Korsrud, was responsible for creating the proteins and growing the bacterial cellulose. The dry lab, who Ko belongs to, takes the samples from the wet lab and ensures the prototypes they make are mechanically sound based on engineering principles.

The whole team has been together since January of this year, taking an introduction to synthetic biology course in the winter semester. From May to August, they worked full-time on the project.

Arcellana-Panlilio recalls during the judging session at the Jamboree, the team was asked to identify the best part of their iGEM journey

“The team described never having met one another before the season started and yet they grew to trust and depend on each other as they collaborated on the project and pushed towards excellence and success,” she says.

“Attending remotely via Zoom, I was touched to hear that answer because of how truly it rang; over the years, I have seen lifelong friendships and alliances made as students engaged in iGEM.”

The Cellucoat team is just the latest in a line of powerhouse iGEM teams assembled at UCalgary. Previous teams have been awarded for their projects in controlling chlorophyll in canola crops and turning human waste to bioplastic for deep space missions.

While they started with fruits and vegetables because they contribute the most to food waste and have a short shelf life, the team says the packaging could be used for other foods as well.

The team has filed for a patent and are hoping to present Cellucoat at pitching competitions to see if they can turn this project into a viable product and company.

It’s not only food packaging that their bacterial cellulose could be applied to, either.

“Bacterial cellulose is currently being looked into as a bandage replacement,” says Korsrud.

Because of the anti-microbial proteins within their cellulose, Korsrud says the team could in theory put in proteins that target disease-specific pathogens if they wanted to take the project in another direction.

“It’s quite a versatile material.”

Travel and competition costs for all four CSM students on the iGEM team were generously funded through the Robert B. Church Legacy of Leadership Fund. 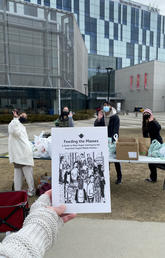 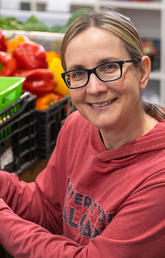 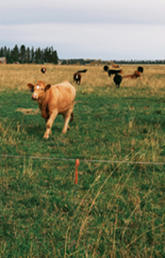 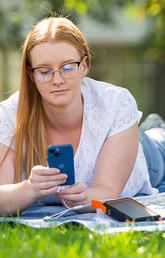 These solar-powered phone chargers are free to borrow at UCalgary. Here’s the story behind them 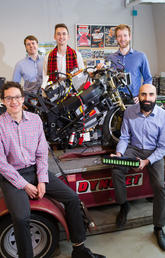 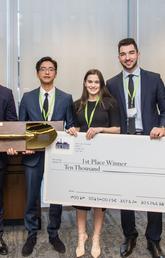 A year of case competitions: Students tackle business challenges, build momentum at home and around the world